Jens Jasper Iverson and Jacob C.W. Nielsen were good friends.  They sailed the seas together, jumped ship together and lived and worked together for 60 years.

For the rest of their lives, Jacob followed Jens’ example.  Although Jacob was the elder, he would buy exactly the same things Jens bought. Jacob even bought the same size clothing, although Jens was much taller.

The only thing Jacob couldn’t match Jens in was a wife. Jens married my great-grandmother, Mary Mulcahy (nee McLean) in 1885. She was a widow with three young boys who must have been glad of the security another marriage offered.  Jens and Mary made a home at “Swallows’ Nest” on the banks of Tooloom Creek in northern New South Wales and Jacob lived on their property for the rest of his life, outliving Jens by seven years and living until he was 100.

Jacob had been jilted by his fiancée and he wore the ring he had bought for her.  Did he never marry because he remained heartbroken and found no one who could measure up to her or was it the shortage of women in the area which caused his continuing single status?

Jens, Mary and Jacob lived a very settled existence, working hard on “Swallows’ Nest” to survive as subsistence farmers and to raise the £5 lease payment which was due each year.

The kitchen had walls and floors of slab and an open fireplace where Mary cooked with a camp oven.  The pantry, eight feet wide and the length of the house, was lined with shelves of preserves.  Mary’s grandchildren remembered that as children they would run to see Grannie’s pantry as soon as they arrived for a visit.

There was a large orchard with stone fruits, grapes, citrus, quinces, pomegranates, Japanese raisins, mulberries, persimmons, apples and pears.  Corn was interplanted with melons and pumpkins.  It was ground for porridge and corn bread and used to feed the fowls.  They grew their own arrowroot and tobacco.  Watering was by bucket from the creek but there were no fruit flies or other pests to contend with as these had not yet arrived in the area.

There were cows for milk, cheese and butter for the family and some butter for sale.  They always kept a couple of pigs to slaughter in winter and then cured the pork for hams and bacon.  They ran 25 sheep and may have sold some wool.

Any supplies which they could not produce came by bullock wagon from Boonah twice a year.

Was this the life Jens and Jacob had in mind when they deserted their ship, the “Theresa”, when it was in port in Sydney in 1863? 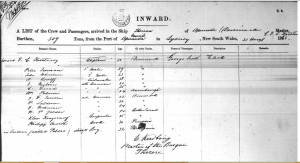 Crew list of the “Theresa” on arrival in Sydney,

Did they dream of life on the land or were they hoping to strike it rich on the goldfields?  While the first flush of the gold rush was over, there were still discoveries being made on a regular basis.  Although the “Theresa” was not a passenger ship, they must have noticed the wave of immigrants arriving in Australia. Perhaps the life of a Danish seaman was not a happy one.  Family stories say that Jens’ brother, Peter, jumped ship in America.

Jens’ final resting place in Warwick, Queensland, was a long way from his birthplace in Denmark.